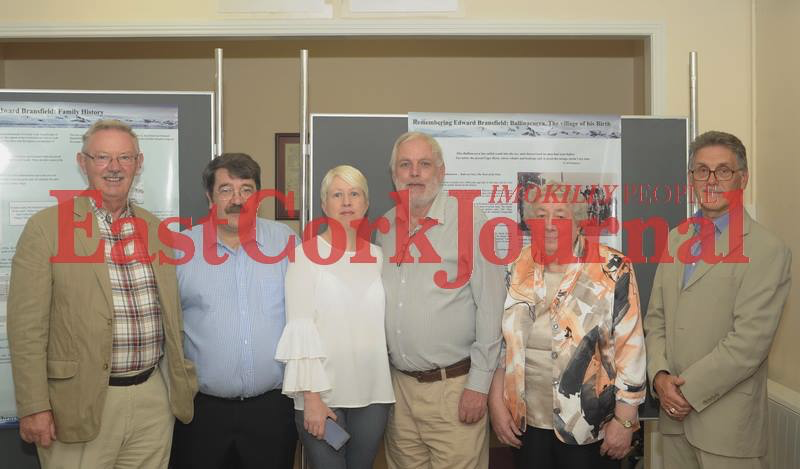 Our event of the 25th August 2017, entitled ‘Remembering Edward Bransfield’, held at Midleton Library as part of Cork County Council “Heritage Week” celebrations, was an exhibition of display board posters documenting various aspects of Edward Bransfield’s life, researched and written by our various committee members. Topics covered were;

The main event, a series of PowerPoint presentations proved a great success and the event was very well supported by the local community and further afield. These proceedings were conducted by Midleton’s Librarian, Anne-Mary Kenneally.
Our sincere thanks must go to Jim Barry of ‘Carrigtwohill & District Historical Society’ for kindly volunteering his time and effort recording and editing the video of this entire even on our behalf.
By way of introduction the evening commenced with the ballad ‘Ballinacurra Boy’ written and performed by Cliff Wedgbury in honour of Edward Bransfield. Cliff has given his permission to post Jim Barry’s video of his performance on Facebook, YouTube, and our website. Among the audience included the sea shanty group the ‘Mollgoggers’ of Cobh who joined in the chorus.

The first of a number of PowerPoint presentations given by members of the ‘Remembering Edward Bransfield’ committee was by Eugene Furlong who spoke about the committee and our objectives;

Eugene then went on to speak of the great Cork Antarctic connection dating back to the days of Captain Cook right up to the present day.
Then came, Ursula O’Mahony; a locally born and bred lady of Ballinacurra whose knowledge of the village is unsurpassable. She told us of the history of this busy and very important port Ballinacurra once was.
The main presentation of the night was given by Liam O’Riordan taking us on a journey through the life and times of Edward Bransfield (1785-1852); from his birth, through his naval career, and his death of at Brighton.
The evening was concluded by John Ahern’s slideshow documenting the village history through photographic images of the village which gave the night a fabulous finale.
The Bransfield exhibition is back at Midleton library until the end of October 2017. It is envisaged these display board posters shall soon be at the City Library and City Archives. Dates are currently being discussed.
The event was reported by the East Cork Journal, and have kindly provided photograph of some of our committee members (left to right); John Ahern, André Saubolle, Anne-Marie Kenneally (Midleton Library), John Furlong, Ursula O’Mahony, and Liam O’Riordan.